Setting up a home network

Thanks for visiting! If you're new here, you may want to start here. You can also subscribe here (RSS) to get updates when new information is posted. To stay up to date, I suggest using the blog reader Feedly (also for Chrome, Android, and iOS).

Wireless LAN is very convenientÂ – particularly for mobile devices, obviously – but I found it to be too slow and unstable for “real” computers. So even before I started planning my new home, I knew that I wanted a wired computer network that provided at least 2 connections to each room in the house, plus a few more for special purposes. A quick count revealed that I was dealing with 22 network sockets, so I realized that I should use “proper” network hardware that would be reliable and easy to use. Here’s what I did.

I figuredÂ a total of 22 network sockets by thinking about how my family was going to use the house. For starters, a wall panel always has 2 network sockets, so it wouldn’t make sense to plan just 1 socket anywhere. For this reason, everything will be a multiple of 2.

I thought about each room in the house and kept a running sum.Â The kids’ rooms need an outlet each, and because I can’tÂ know how their rooms will be furnished ten years from now, I plan outlets on different walls.

Two roomsÂ withÂ panels on two walls each, that’s 8 ports already!Â This is how things add up quickly. But of course they won’t all be used at the same time, so it’s okay if the total number of wall sockets exceed the capacity of the router or switch.

The master bedroom needs an outlet too -Â actually I should have put one behind the headboard as well, but I only noticed after we had moved in – live and learn! In the living room, I’m planning 4 ports in a row by the TV because that’s often a place where you have several devices with network connections. I’m also planning 4 sockets in a row by my desk for the same reason – I would use the first two ports right away and then I’d still like to have some left for later.

All those ports have a cable attached, of course. Where does the other end go? All cables come together underneath the main staircase where I have planned a small area as a network central. This is also where the phone cable and Internet connection from the street ends. Having everything neatly in one place reduces clutter and extra cabling. 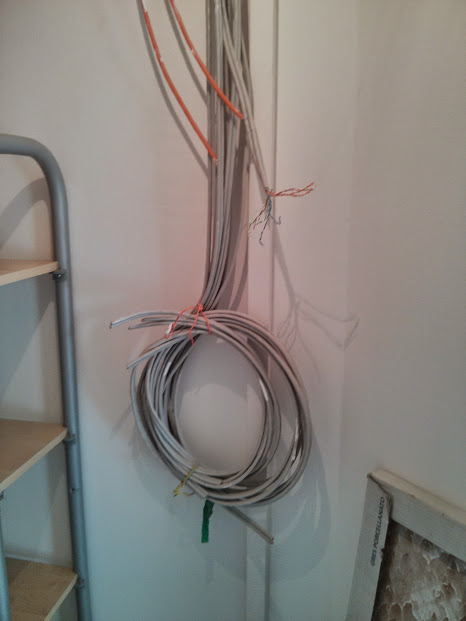 The electrician didn’t do a very tidy job. But at least all cables are here.

One last thing about the cables. In my opinion, Cat5e is good enough as it supports gigabit network speeds just fine. Only absolute experts would insist on Cat6 but it’s difficult to justify the extra cost.

The cabling is only half the story, of course. Even the finest wall sockets won’t help if you don’t connect anything to the other end to the cables. So, what do you need?

First, all those loose cable ends need to go somewhere. We use a patch panel for this. It provides a practical means to connect things together using proper cables. 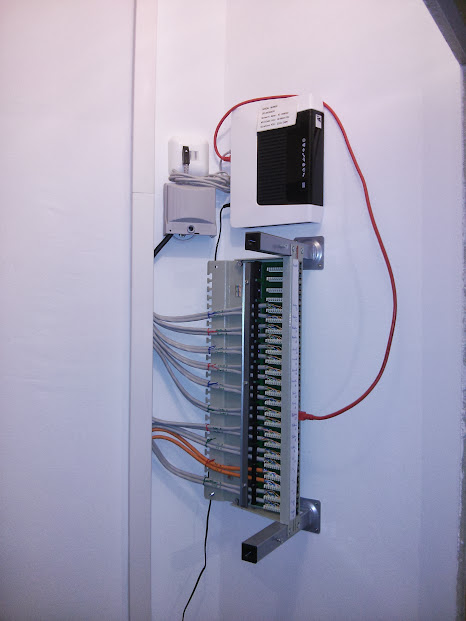 Cables look much nicer now. I added the cover to the patch panel after taking this photo.

Patch panels come in a variety of sizes and qualities. You need a panel with as many connections as your wall sockets. My house has 22 sockets, so I got a panel with 24 ports. (They usually come in increments of 8.)

Once all those loose cables are nice and tidy, we need a switch to connect them together. The brilliant thing about a switch (as opposed to a router) is that it’s intelligent: it will only send the signals between the two end points that communicate. A router would broadcast every byteÂ to the entire network, which slows things down – especially if you have many devices on the network. 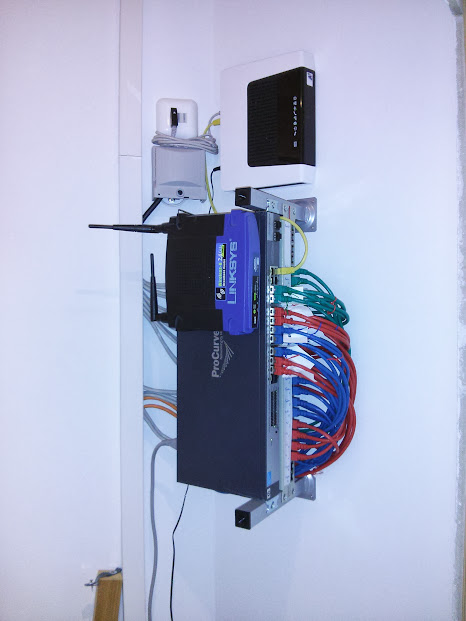 All done: the patch panel is covered by the switch (dark grey) and the wifi access point (blue). Above is the DSL modem (black&white) and the phone line (grey and white).

Like the patch panel, my switch also has 24 ports although it’s unlikely that I would ever need all ports. A smaller switch would have sufficed but I bought the switch and the patch panel used at bargain prices, around â‚¬40 in total.

So now we have the wall sockets, a patch panel, and a switch. Our network is complete and the devices can talk to each other (and the switch ensures that they don’t bother the rest of the devices).

Oh, how could I forget – we want an Internet connection! The Internet Service Provider usually provides the modem we need, and all we have to do is plug it into the switch as well. This can be a cable modem, or a DSL modem, or something similar. They all do the same thing: they connect your computer (or in our case, home network) to the Internet.

My DSL modem is similar to this one. I turned off its wifi antenna.

The modem is typically a router at the same time. This is convenient because of the things a router does is assign addresses to the devices on the network (I elegantly omitted this detail back when I said the network was complete).

The modem also has a WiFi antenna. That’s another thing I didn’t mention above, but of course we need WiFi to connect mobile devices. Now that all other devices use a wired connection, the WiFi isn’t as crowded, and the mobile devices get better traffic than they otherwise would.

In my case, the ISP’s modem is not very good and kept crashing when there was too much WiFi traffic, so I turned off the modem’s WiFi and used a separate WiFi access point instead. Then I added another access point on the upper floor of my house because the WiFi wasn’t very good up there.

All of these things are connected to the switch. What I haven’t said yet is that the switch (and the patch panel) are gigabit capable. That’s useful because copying large amounts of data from one computer to another takes time, but if the computers are gigabit capable too then it takes a fraction of that time. The benefit is only on the local network though because your Internet connection can’t keep up – mine is only 8 megabit…

In a business, all this equipment would be in a rack, probably along with some servers and whatnot. I took a pragmatic approach and simply screwed some furniture legs to the wall, spaced so that I could mount the panel and switch on them. The modem and access point were easy to add without screws. Simple, cheap, accessible, and out of the way!

And that’s basically the entire story. This is what I have, and it works very well. I’m happy that I have this setup, and happy that I was able to plan like this before construction of the house. It’s harder to add in an existing house.

This entry was posted in technology and tagged computer, DIY, internet, network. Bookmark the permalink.

1 Response to Setting up a home network